Baseball is Never Over | The 2031 Boise Rumble Ponies

With the 2017 World Series officially over (and what a World Series it was!), I need an offseason outlet for my love of the game. So, I invite you to follow me on my journey in OOTP 18 as the GM and Manager of the Boise Rumble Ponies.

The year is 2031, and in this world, baseball players from all eras become available to draft each year. Fictional players generated by OOTP are also included. Though the league setup is the same as the current MLB (American League & National League, with 3 divisions in each), there are 34 total teams. Also, the Designated Hitter position has been eliminated in the American League.

The Rumble Ponies reside in the NL West Division, which also includes the Amarillo Hawks, the Los Angeles Bugs, the Denver Bass, and the Seattle Crabs. Boise has an average Market Size in comparison to the rest of the league, and has above average Fan Loyalty. Fan Interest is at an all-time high, maxed out at 100 points out of 100.  My current budget is $150,000,000 (9th highest in the league) and my current player payroll is 117,847,500 (15th in the league). Aaron King, age 74, is the owner of the Boise Rumble Ponies, and he can be described as lenient, interfering, profit-focused and as an economizer. He will offer contracts to players he likes without consulting me, which is definitely an added challenge when constructing my roster.

Here is my current active roster (age and rating out of 80 in parenthesis):

My focus for constructing this team was youth – the average age of my active roster is just over 26 years old. I have traded away all of my best assets leading up to 2031, obtaining multiple first and second round picks each year to keep my farm system stocked – without hurting the product at the Major League level. As a result, the Boise Rumble Ponies have the #1 farm system in the league, with the 1st, 5th, 9th, 32nd, and 61st best prospects in the game (Walter Johnson, Dick Ruthven, Cap Anson, David Sanchez and Greg Vaughn, respectively). Compared to the rest of the league, you can see how my starting lineup stacks up:

While these rankings look solid, OOTP’s Preseason Predictions have the Boise Rumble Ponies finishing 2nd in the NL West Division, behind the LA Bugs:

Let’s take a look at my starting lineup for Game 1 of the 2031 season, and the player ratings for each starter.

Leading off and playing CF is Danny Arias, a last minute free agency signing after Duke Snider broke his wrist in Spring Training. Duke will be out for 4 months, and I needed to fill the spot. I signed Arias on a 1-year, $7,500,000 contract. Arias can play all 3 outfield positions proficiently, and has impressive speed. He boasts serious home run power at the top of the lineup, and hits for a good average. My biggest concern are his intangibles: he is greedy, has low leadership skills, and shows little loyalty to the team. My plan is to keep him until Duke comes back, and hopefully trade him before the deadline for draft picks. Arias is a fictional OOTP player.

Batting second and playing LF is Buster Hoover. Hoover has been a 4+ WAR player for the Rumble Ponies since he was drafted in the 3rd round of the 2025 draft. While Hoover could be described as a defensive liability, he has shown above average contact rates and plate discipline. He is a career .353 hitter through his first 6 seasons as a result. Hoover is signed through the 2033 season, and is also a candidate for a trade deadline move. Hoover is a real player who played for 3 seasons in the 1880s-90s. In his rookie year (1884) he played in 73 games and had 108 hits.

Batting third and playing RF is Lou Gehrig. Gehrig, as we all know, is a great all-around player and has the intangibles a GM dreams of (very loyal, great work ethic, low greed). I picked up Lou last season from our division rival, the Seattle Crabs, trading Joe DiMaggio straight up. Joe had suffered a concussion at the end of the 2029 season and was out for 6+ months. My owner offered him a 4-year extension for $20.6M a year during the off season, and while I’m happy to have The Iron Horse anchoring my lineup, it’s costing me quite a bit of salary space. 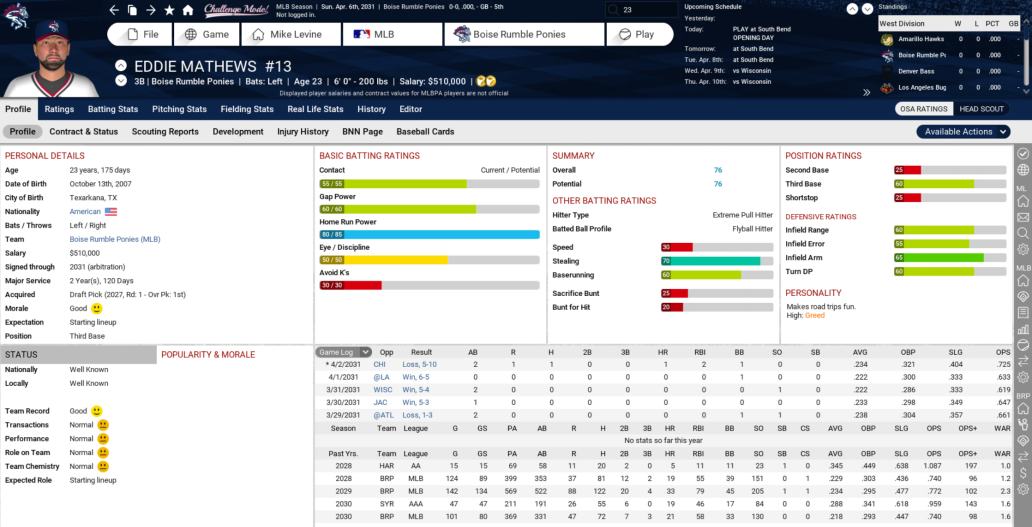 Batting fourth and playing 3B is Eddie Mathews. He is a slick-fielding infielder with tremendous power and above average contact ability. While he has little speed, he is a great baserunner. Eddie was drafted #1 overall in the 2027 draft. A member of the 500 home run club in real life, Eddie has hit 73 homers in his first 3 years in Boise.

Batting fifth and playing 1B is Paul Goldschmidt. Paul was a huge pickup for me in the 2028 season through a blockbuster trade that sent Roberto Alomar, Joe Pepitone, Mauro Gozzo and Joe Hesketh to the Highland Suns in exchange for Paul, Corey Kluber, Art Whitney and a 1st round draft pick. Goldschmidt is a serviceable first baseman that has great speed and stealing ability, and also has tremendous power and contact ability. He has been a 4+ WAR player for Boise over the last 2 years, and I anticipate similar results this year. 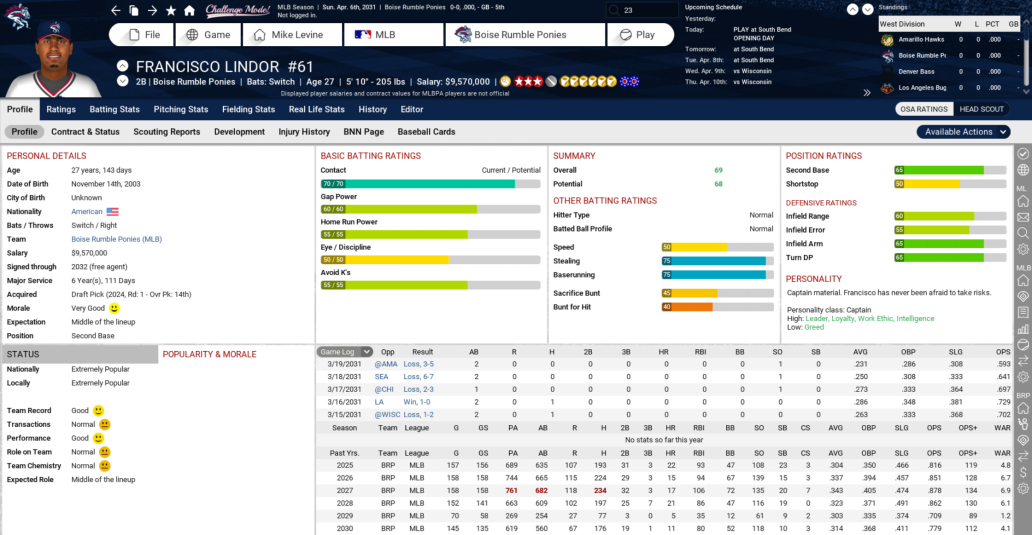 Batting sixth and playing  2B is the team Captain and clubhouse leader, Francisco Lindor. With all of the right intangibles (high leadership ability, loyalty, work ethic, intelligence and low greed), Lindor is the perfect candidate for Captain. He can play both middle infield positions, has great speed and stealing ability, can hit for average, and can pop 20 home runs in a season. Through 7 seasons in Boise, he has accumulated 32.5 WAR and has a .321 average and 1209 hits. Lindor is adored in Boise.

Batting seventh and catching is Javy Lopez. An average defender, Lopez hits for both average and power. His 2030 season was a breakout season, despite only playing in 117 games – .318 average, 27 homers, 97 RBI and 4.6 WAR. He is extremely popular in the Boise area.

Batting eighth and playing SS is 22 year-old Corey Seager. I acquired Seager in a trade in 2028, along with Madison Bumgarner, a 1st and 2nd round pick, in exchange for Bug Holliday, Ed Karger, Russell Martin, Richard Hidalgo and Hank O’Day. Seager displaced Lindor as the Rumble Ponies’ SS because he shows incredible range and has a huge arm. While his plate discipline and strikeout rate are less than desirable, he can hit it a mile when he makes contact. In 152 games last season, he hit .282/.349/.451 with 21 homers, 87 RBI and 4.5 WAR.

Batting ninth, and my opening day starter, is right-hander Huyler Westervelt. With a ++fastball, curveball and changeup, and a +slider, Westervelt makes hitters dance in the box with his stuff and movement. Acquired in a trade with division rival LA last year, Huyler went 15-7 in 34 games with 296 Ks, a 1.05 WHIP and a league leading .278 BABIP. He gave up only 8 home runs all year, but allowed 89 walks. He accumulated 7.5 WAR last year, and I’d be thrilled with a similar showing in 2031.

The Rumble Ponies’ 2031 season kicks-off with a 3-game series against the South Bend Cubs, in Indiana. LET’S GO RUMBLE PONIES!