Home › NBA › Stephen Curry is the Next Michael Jordan

Stephen Curry is the Next Michael Jordan 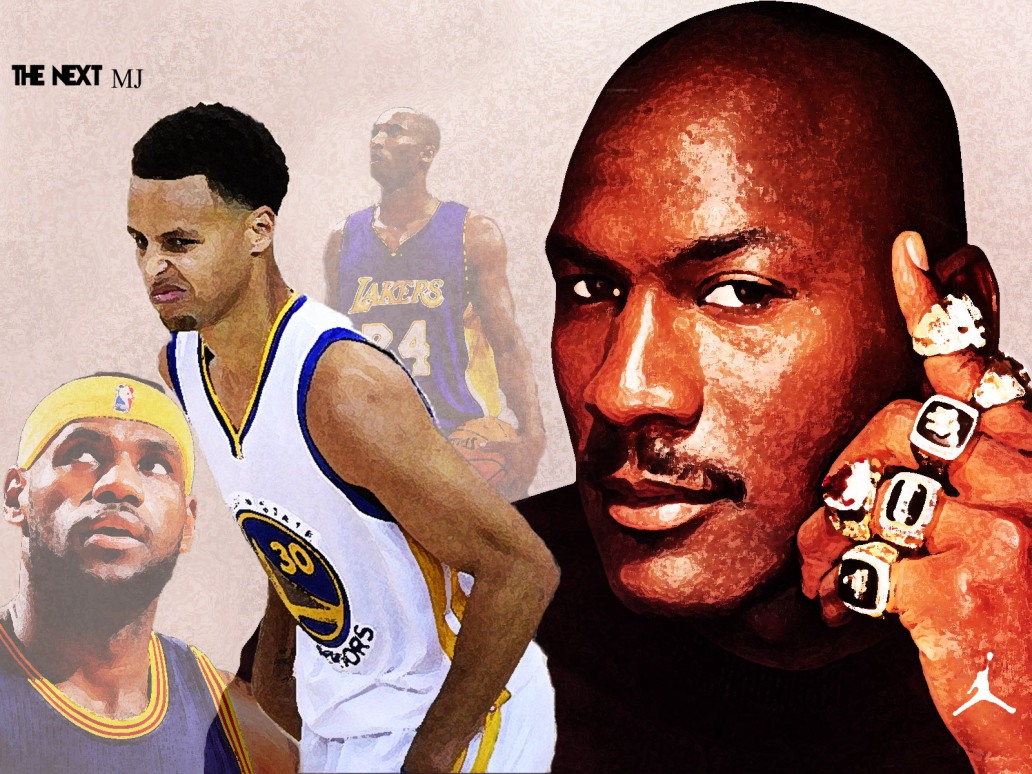 This isn’t the first time we’ve seen this. In 2008, I was a sophomore at Santa Clara University. The only thing Santa Clara athletics had going at the time was alumni Steve Nash’s success with the Phoenix Suns and the annual chance at upsetting West Coast Conference powerhouse Gonzaga. Gonzaga had made the NCAA tournament as a 7th seed, while Santa Clara put up another forgettable season. All I had left to cheer for in the college basketball season was for Gonzaga to get upset by some team named Davidson.

I, like many other Santa Clara students that day, got what we had hoped for, as Gonzaga lost a heart-breaker, 82-76. I thought that seeing Gonzaga lose in the first round would be the highlight of my tournament experience. It was only the beginning.

March 21, 2008, is when I first saw Wardell Stephen Curry. While I had probably seen his highlights thoughout the year on my nightly watching of SportsCenter, this was the first time I saw a complete game of his. I was mesmerised. I was no longer rooting for Gonzaga to lose that game. I was rooting for Stephen Curry. 40 minutes and 40 points (14-22 FGs, 8-10 3PT, 4-6 FT) later, and for the first time in my life, my favorite basketball player wasn’t in the NBA.

While the stutter-step, inside-out left handed dribble, behind the back move is missing from this highlight, how eerily similar was that performance to what we’ve seen this season? 1 inch of open space and splash. We saw this coming and we still can’t believe our eyes.

I’ve seen enough Hardwood Classics to get an idea of what Jordan meant to the current generation of basketball players. A 6-6 athletic freak, who could dunk from anywhere, hit every mid-range jump-shot possible, guard anyone, and was the most competitive player in the league. Jordan became the prototype for what we expected in a star player. From that point on we started expecting things from every guy 6-5 and above with a 44+ inch vertical. We kept thinking, this guy has all the same athletic advantages, why can’t he do what Jordan does? See Kobe Bryant, J.R. Smith, Penny Hardaway, Grant Hill, Lebron James, Tracy McGrady, Vince Carter, etc. All of them tried their hardest but most fans would agree, none have come close to His Airness.

The more I think about it though, the more I come to the conclusion that we will never see another Jordan, and it’s not because of talent. Jordan perfected his style of play and we are coming to the end of an entire era of basketball that was influenced by seeing Jordan’s perfection. Everyone wanted to be like Mike. How can we expect someone to wow us like Jordan when all of their respective contemporaries have looked up to the same guy and all of his moves for the past 3 decades? That means the league has spent almost 30 years developing ways to try and stop this guy, of course wannabes and replicas aren’t going to cut it doing the same thing. There aren’t 30 Michael Jordan’s to spread around the league so the other teams had to have been formulating other ways to win. Another comparison I could throw out there is the dunk contest. We’ve seen everything already! There are only so many ways to dunk a basketball. Kobe won the dunk contest dunking between his legs and he wasn’t even the first person to do it. Can’t we at least concede that the most exciting event at All-Star weekend is no longer the dunk contest but which Splash Brother can drain more 3’s?

While LeBron’s critics are quick to point out his 2 and 4 record in the Finals, they fail to mention how much 3-point shot attempts have increased over the past few years, while the accuracy has remained the same. Timely 3-point shooting can now neutralize any star who lives inside the 3-point line. Critics say the Warriors are the result of rule changes but Jordan’s best Bulls team in 1995-96 employed the league’s best 3-point shooter in Steve Kerr at 51%. That year Jordan also hit the most 3’s in his career (111) and hit for .427%, good for 10th best in the league. So like the current Warriors team with the Splash Brothers, the Bulls had their own 3-point shooting combo. 1 who also happened to be the best player in the league. Michael was able to dominate his era because teams weren’t ballsy enough to take that many 3’s yet while his teams always had one of the best court spacers in the league: 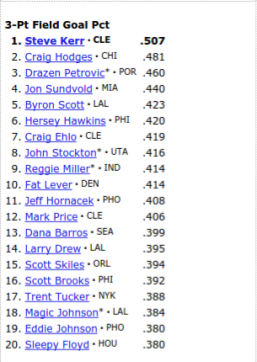 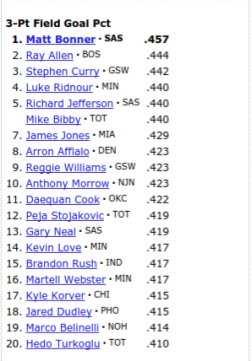 After 30 years of game planning for the Jordan type star, Lebron is no longer as effective as he would have been in a different generation. While Lebron can score 2’s at an efficient rate, his 3-point shot is not elite. He’s actually much better at using his superior athleticism to set up deadly shooters. Curry is the only player in the league who can set himself up and hit contested 3-point jumpers with elite acurracy. His quickness and handles make him virtually unstoppable if he decides to pull up for 3 in transition. Back then, there was only 1 Jordan, and in the current NBA right now, there is only 1 Stephen Curry. The only difference is Curry’s bullets are worth 50% more than Jordan’s.

Jordan leads in pretty much every category 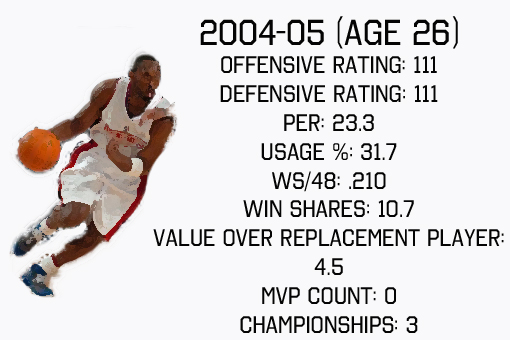 LeBron leads the group in MVPs

There are always those little things that separate the great from the transcendent. Sometimes those little things are more subtle than others. Growing up a San Francisco Giants fan, I knew that Barry Bonds was the greatest player to ever play the game of baseball. Bonds would get 1 pitch to hit every at-bat, if that, and he would hit it out of the park. He was so feared I remember him getting intentionally walked with the bases loaded. In a sport where being successful 30% of the time is considered great, seeing a team give up a run rather than take that chance was quite a statement.

Stephen Curry had one of these moments at Davidson. I remember the SportsCenter highlight clearly. Stephen Curry standing in the corner, 2 defenders standing next to him, watching his teammates play 4 on 3. Possession, after possession, after possession. The competitor inside must have been dying, but Curry played an entire 32 minutes without scoring a basket and only attempted 3 shots. There’s no way MJ or Kobe would have let this happen but Steph knew his best chance of winning that day was to stand in that corner. Up until that point in Davidson’s season, through 5 games, Curry was averaging 35.0 PPG on 53% shooting. It was a bold move from Loyola Maryland coach, Jimmy Patsos, and despite being down by 30 points in the 2nd half, stuck with the strategy for the entire game. Standing in that corner for 32 minutes took a lot of discipline and unselfishness for a 20 year old. Maybe we should have taken a closer look at that discipline when questions about whether Curry’s slight build, lack of point guard skills, and jump-shooting game would translate to the NBA game.

I once read somewhere that the true sign of greatness is making the difficult seem effortless. While Curry has not had the longevity of success as MJ, I have to imagine that this is the same feeling fans around the league were getting in the late 80’s and throughout the 90’s. Curry already has an MVP under his belt and picked up his first championship a year earlier than Jordan got his. Like Jordan revolutionized Nike and the basketball shoe game, Curry is making similar waves with Under Armour. Since Curry’s magical run last season, Under Armour is now the number 2 basketball shoe seller in the world, with some of his Curry One model last year selling out in less than 10 minutes. In the 2nd quarter of 2015 alone, Under Armour increased sales in basketball shoes by 754%. That’s not a typo. So while some may not be willing to concede anything in the Jordan debate, the proof is overwhelming that the next generation of players will be wearing Under Armour and patterning their games to be the next Stephen Curry.