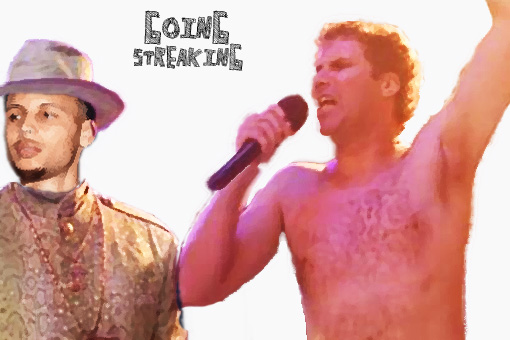 Bring your green hat people, we’re going streaking with the Golden State Warriors on their 7 game road trip. An undefeated excursion would bring the Dubs to 25-0 on the season and 29 straight regular season wins dating back to last season. Although an undefeated road trip is highly unlikely, the following graphic posted on ESPN shows they have more of a fighting chance than one would think: 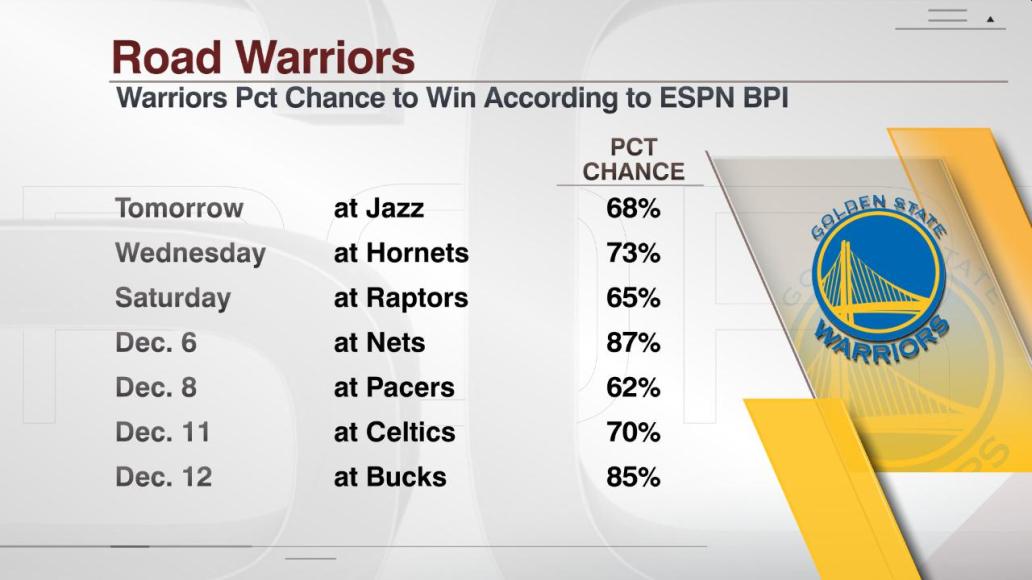 We’ll take an in-depth look at each match-up on the road trip as the Warriors move forward through their schedule.

Golden State: The Warriors will be playing their 3rd game in 4 days in a tough city to play in Utah. Harrison Barnes will be out again meaning the Warriors will have to get the most out of Brandon Rush. Although he has struggled in his starts this season, he has shown flashes of scoring points in bunches. With Barnes out and Rush’s inconsistencies, the Warriors will need better play from Klay Thompson, who is playing like a player with a back issue. Granted, Barnes improved play has taken touches away from Klay so this should give Klay a chance to get more shots in.

Utah: The Jazz will be in their 3rd game in 5 days and will be the more rested team. They also have the advantage of the altitude. The Jazz are last in the league in pace of play, so their strategy will be to limit the amount of possessions the Warriors have. The Jazz are also 4th in the league in offensive rebound rate according to the Hollinger statistics. Many people site offensive rebounding as a way to punish the Warriors for their lack of size so this should be a good test for the Warriors on the road.

Neto has proven to be a solid defender thus far. Since he is not in the game to score, he should be able to provide heckling defense on Curry making this a closer match-up then what appears, think Delly in the finals. Unfortunately, Neto does not have the offensive prowess to make Steph work on the defensive end. The most effective strategy this season has been attacking Curry relentlessly. Chris Paul went at Curry and got him in really early foul trouble and Jarrett Jack scored 28 on his old teammate and buddy. Both of the games resulted in the Warriors closest games this season. Although Curry is actually one of the best defenders in the league, making him work on defense has clearly been an effective way to limit his efficiency and Neto does not have the ability to do that.

At 6-8, Hood has the size to match-up against Klay on the defensive end, something most teams have a hard time doing. Both Hood and Thompson have dipped from the 3-point line this season. With Barnes out, Thompson will have to re-gain his stroke from last year if the Warriors are to keep the streak going against the Jazz. Both players have very similar usage rates, so I expect a stalemate here in terms of production.

Hayward has struggled so far this season after his career season last year. He also struggled in past games against the Warriors. Although he will start the game off against Rush, he will probably spend most of his night against Andre Iguodala. Hayward has been inefficient this season so it’s hard to see him having a day against Iggy or the surprisingly defensive minded Rush we’ve seen this year. The Warriors don’t expect much from Rush but if he can hit open threes and play average defense, the Warriors have enough talent to cover for Barnes missing a few games against below .500 teams.

Favors is currently listed as questionable with a personal issue but we’ll just assume he’s playing. Both players are having amazing seasons, making this a fun match-up. Teams that have given the Warriors a run had strong performances from the PG and PF match-ups, see Thaddeus Young (26 points on 12-22) and Blake Griffin (23 on 10-21 and 27 on 11-20). Favors has been efficient on offense and a stud on defense alongside Rudy Gobert. Draymond will have his hands full stopping Favors from getting his and getting his share of boards. On the flip side, Favors will have to keep up with Draymond playing 4-3 coming off pick and rolls with Curry.

Gobert and Bogut are two of the best centers in the league. Although he’s missed games, Bogut’s play so far has been unbelievable when you look at the plus/minus in his offensive and defensive rating. The combination of Bogut and Ezeli should be more than enough to neutralize Gobert, who is not performing offensively at the rate he was last season. Not too many teams have two quality big men to throw at Gobert so this should help the Warriors, who struggled with containing Gobert last season.

This is where the Warriors really pull away from teams. While we like to talk about the starting lineup, the bench the Warriors can roll out is far superior than any other team in the league. One of the reasons the Warriors have been so great this season is the bench has improved. With a year together, the bench has found its identity. Iguodala is still the playmaker but has added the 3-point shot to his game. Livingston has been posting up and attacking the mid-range area. Barbosa is still the same speedster who has the ability to attack the basket and hit open threes, while Ezeli gives them an athletic rim protector to give Bogut valuable rest.

The Jazz on the other hand have a couple of young developing players coming off the bench but lack the quantity of the Warriors bench. While both players are capable of scoring 20 off the bench, the Warriors depth still gives them the advantage.

Although the Jazz present many problems for the Warriors, they lack a PG presence that will make Curry work on the defensive end. The Jazz may be better off starting Trey Burke or running more with a rotation of Alec Burks and Rodney Hood at the point and off-guard. Although the Jazz will try and slow the game down, they do not have the offensive fire power to match the Warriors, even on an off shooting night.

Like Loading...
‹ The NBA’s Top 10 Players
What Does Jordan Zimmermann’s Deal Mean For The Remaining Free Agent Pitchers? ›